The Serrasolses Brothers take a run down this south Californian classic.

Unsponsored was able to get a closer look at a prototype of the new Pyranha 9R MKII earlier this year. You can check those images out by clicking here.

Welcome to Movie Monday 14 May 2018 at Unsponsored. We hope you enjoy the edits selected for this weeks edition.

Please take some time to check out the rest of the site.

So after many years of images grabbed from videos and the odd image caught of the mysterious Dagger Phantom at certain paddling spots around the world we have got two here at Unsponsored HQ.

These two are part of the first batch into the UK. Even though the image above appears to show two different sized Phantoms they are in fact the same.

The Phantom is the latest high-performance model to join the ranks of the Mamba, The Green Boat and the Nomad, and has already won numerous short boat class podiums even before its launch. The Phantom stays high-and-dry on the water, yet still carries its speed through holes and away from drops, and achieves the perfect balance of tracking and maneuverability with the ability to rapidly change direction when on edge. The volume of the Phantom has been optimized for both performance and fit with sizing that can accommodate various paddler heights and sizes.

The Dagger Phantom started out as a team project that wasn’t necessarily meant to go to market. The Dagger Phantom is a performance creek boat that has been designed to win the sub 9ft class whitewater races that we see around the world.

So I have two at Unsponsored HQ but only one of them will be with me long term. The Phantom joins my Dagger Jitsu and Spade Kayaks Ace of Spades in my gear storage facilities. Both of the Dagger Phantoms shown here are full production models that have built in the Dagger’s US facility.

The Phantom has lots of bow volume and rocker designed to keep it high in the water and to break though stoppers. This combined with the flat hull, and the flare in the bow allows for planing and pivoting in big water. The stern has a much lower rocker than the bow and has the squared off tip. This helps make the boat more manoeuvrable the faster you are going.

It is a creek boat so the safety features are also in place. 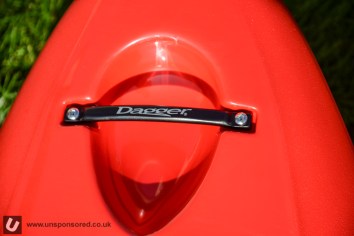 The outfitting is Dagger’s well established contour ergo Outfitting in its creeking guise. It adds weight to the kayak but it works super well.

The feature I really like (and you’ll see this many times on the site) is the ability to raise the front edge of the seat. As you would expect there are super adjustable hip pads, padded knee protection, and ratchet back rest. The hip pads come supplied with a range of shims that can be added/removed to provide the optimum fit. A couple of quick release buckles allow easy access to the back of the pads to add/remove the shims.

Storage for your throw line is easily accessible. You can also see the seat fore/aft adjustment bolt in the shot below.

So I need to get the setup done. My name/contact details written into the boat, an Unsponsored sticker added and finally some airbags installed.

Check these edits out.

Replace this widget content by going to Appearance / Widgets and dragging widgets into this widget area.

To remove or choose the number of footer widgets, go to Appearance / Customize / Layout / Footer Widgets.